When we purchased the Vermont house, we teamed up with HGTV’s House Hunters to film some of the process.

It was so much fun filming, working with the producer, director, and crew, and even more thrilling to watch live on TV.

There was a lot of material after five days of filming, so it was pretty cool to see how it was all put together.

We thought HGTV did a great job.

If you have not seen the episode yet, you can watch it on HGTV here.

While I wrote a blog about our experience before the show aired, the following provides a more in-depth look behind the scenes and where we are now.

It was so cool to see our small town and home on TV.  We have lived here for over twenty years.

It’s been a great place to raise our family because the sense of community is very strong and family-oriented. 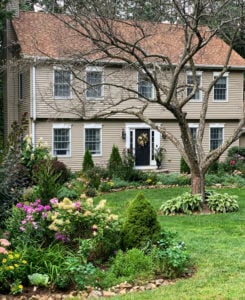 As an avid gardener, I was excited to see some of my gardens shown on TV.

I love spending time working in the beds and it was really fun to see it from the viewer’s perspective. 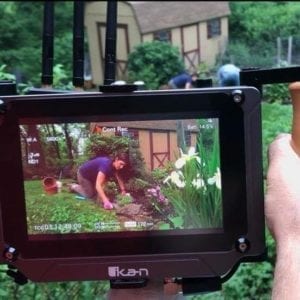 My kids were super excited to film.

The moment they arrived from school, they were mic’d up and ready to go.

We filmed at a few locations in our hometown so we couldn’t wait to see what clips would make the show.

That was an interesting one!

You could not beat the location – it was literally on the lake with outstanding views.

With a little bit of work, that house could really be awesome, but ultimately, it was too far from the ski mountain and too small for us.

Chris really wanted to be up there for skiing and it would unfair to travel 3:45 hours to get up there, then have him travel another :30 minutes to the ski mountain.

We also have a very large extended family and friends that we like to travel with and could not accommodate in this house.

The bones were just not there.

The bathroom layout was also a little funky.

One small bathroom on the main floor with three teenage daughters would never work for our family.

We could add a second bath to the upstairs, but that would be a much larger project than we wanted to take on.

And no, the outhouse does not count as a second bathroom. LOL!

While this house was on a lake with incredible views, it was not good fit for us as a family, so…X.

We all liked the ski condo, but I could not get past the layout with the hot tub and sauna off the main floor bathroom.

Wasn’t that so weird? We discussed how to reconfigure that space, but it sounded like a lot to undertake.

As an aside, that whole scene was literally the funniest thing that happened while we were filming.

I could not believe Chris sat on the toilet like that! I was crying from laughing so much. LOL!

Aside from the hot tub/sauna/bathroom layout, we loved the rest of the house and our immediate family could make it work.

It was a little too small for hosting guests though.

None of us were fans of the captain’s ladder to the loft area.

Given the accessibility, that space was too unusable for our needs. 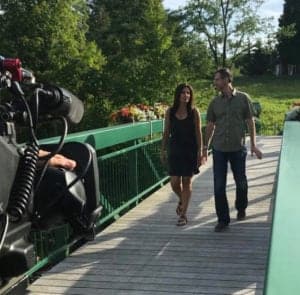 If we were only going up for skiing, that condo was super close to Mount Snow. The HOA fees were pretty high though.

If we purchased this condo, we would likely only use it during the winter months which did not justify the higher fees.

Our kids are so involved in activities that we won’t reasonably be able to get up there every weekend, even in winter, so it seemed kind of limiting.

Ultimately, we weighed the proximity to the mountain and our desire to house guests.

As much as we liked the condo’s cozy feel, it just wasn’t for us. X 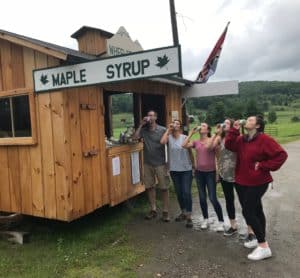 First impression…I literally thought it was the ugliest house I have ever seen.

From the exterior, there was so much going on. It had zero curb appeal and no foundation plantings.

And the bugs…did you see the bug crawl across the camera?

It was so buggy while filming, gnats were literally swarming us. Get me inside stat!

Once inside, my first impression changed the moment we walked through the door.

The mudroom and spacious open floor plan hit the mark.

While the home was a little outdated in terms of the kitchen and bathrooms, it had a great layout and good bones.

Those old barn beams added so much character to the house and the amount of light coming in from all the windows was incredible.

We saw this house as a diamond in the rough because we could totally fix it up.

What About the Deck and Moisture Issues?

That deck was an issue.

It was not sturdy and appeared to have structural problems.

Since Chris is a forensic architect, he was able to flush out the issues and knew what it would take to repair them.

He also found some rot around some of the windows and doors.

I would not have noticed them, but this is where Chris’ experience in forensics comes in handy.

He can find anything good or bad and grade the severity of the problem so we know what we are getting into. 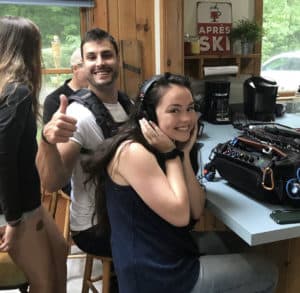 Although it was at the higher end of our price range, it was one of the larger houses we saw.

We could envision how we would update and use it, the house was a 1o min drive to Mount Snow, a 5 minute drive to the lake and that finished basement was a huge bonus!

If we could get the asking price reduced to make some updates and repairs, this was it. Check!

After We Moved In

We closed on the house in late spring and spent a lot of time up there on weekends trying to clean it out and fix it up before HGTV came back to film the reveal part of the episode.

We did not have a lot of time before that last day of filming so we were choosy in terms of what we could reasonably accomplish.

One of the things we wanted to do but weren’t sure about, was re-siding or painting the exterior of the house.

To do either was too big a job for us to complete in a short amount of time.

We knew we wanted to make it all one color, but we were not fully committed to the method yet. 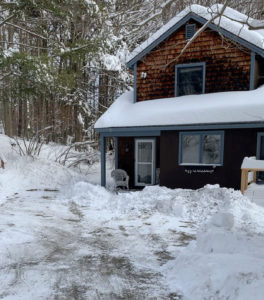 The quickest, least expensive option to fixing it up in a short amount of time was to paint the vertical cedar siding a darker shade of brown.

As a temporary fix, that small amount of paint did wonders. #upgrade

To address the lack of curb appeal, I added some low-maintenance plants that I dug up and divided from New Jersey that I thought could take the harsher Vermont temps. 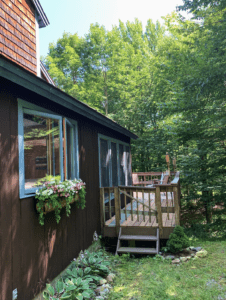 Adding those plants made a huge difference when you walk up to the house.

In addition to plantings, I added a window box with flowers under the kitchen window to add warmth to the exterior of the home and make it feel more inviting.

Chris immediately got to work on that deck.

It really bothered him that it was not built correctly so he grabbed my brother-in-law and some buddies, and they started rebuilding it.

In addition to redoing the decking, he also built new deck rails in the fall of 2020. And it looks SO much better now! 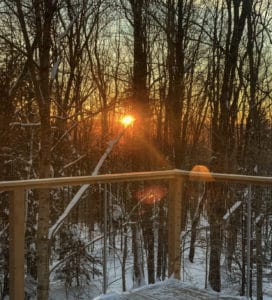 I repainted the main floor bathroom a shade of blue that tied in to the rest of the house.

We replaced all the fixtures and updated the wall cabinet with some rustic wood floating shelves.

I also made that towel rack out of wood pallet for like $10. I’ll blog that later.

At some point, we will completely renovate this bathroom, but for now, it looks good and works for us.

I made two really cool ski-related signs, one of which you saw in the show and the other is depicted in the picture with the crew below.

The sign pictured below is made from a wood pallet and is super easy to make. 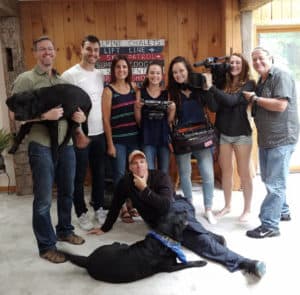 After Filming House Hunters Concluded – Where Are We Now?

After our House Hunters episode aired, we’ve been enjoying the cabin and get up there a lot throughout the year. 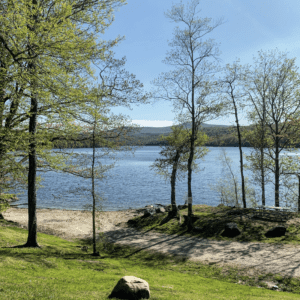 In the summer and fall, we go to the often with kayaks, paddleboards and our dogs. 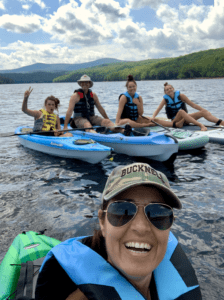 And recently, we bought a boat! With the boat, we were on the lake all summer long! 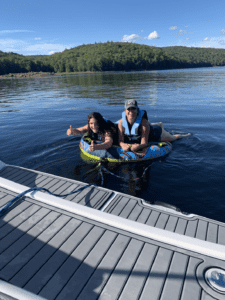 The lake is literally a 5-minute ride from the house.

We may not be “on” the lake, but it is so close to where we are that we are really happy with the proximity.

In addition to lake living, we’ve also done quite a bit of hiking.

There are lots of great trails up there and so much to see!

And, we’ve hit every restaurant in the area.

The food is one of the best parts about visiting Vermont because it’s really good almost anywhere you go.

When I say “we,” I mean Chris and the girls – I am much better at the après ski portion of the day. LOL! 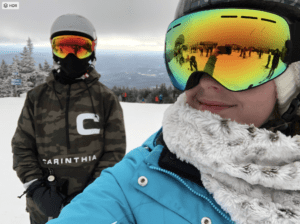 The mountain is less than a 10-minute drive to the ski mountain so Chris is pretty happy with that.

It’s not the ski-on/ski-off he wanted, but worth the sacrifice to be able to accommodate guests.

That’s a little more my speed. 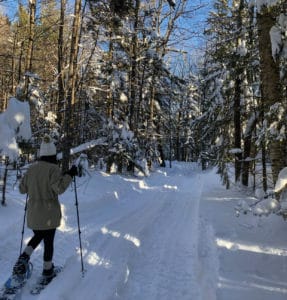 Since filming concluded, I refreshed all of the bedrooms, basement, and loft area.

There is so much more I want to do, but just to make it more comfortable and inviting, we replaced beds, mattresses, linens and added a fresh coat of paint in every room.

I am not touching the knotty pine walls because we love the character it adds to the house. 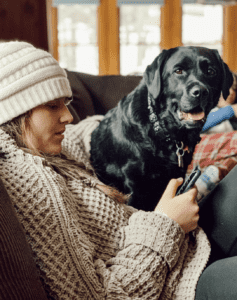 It did get a small makeover though.

I changed the shower curtain to a neutral white and painted the walls the same shade of white as the rest of the house.

We swapped out the wall cabinet, added some floating wood shelves and the DIY wood pallet towel rack I made for the other bathroom you saw in the reveal.

This bathroom will be the first major update when we have the time.

But for now, it works.

It has been really wonderful to have a place to get away and spend time with our kids.

With our oldest two daughters in college, we are focusing on living in the present, slowing down the pace of life and trying to savor the time we have left with them “in the nest.”

We really love the house, Wilmington, and our experience filming with HGTV’s House Hunters.

Thank you so much for supporting us, watching the show, and having as much fun with it as we did.

It’s been wonderful sharing this experience with you all.

Thanks for stopping by the blog today! 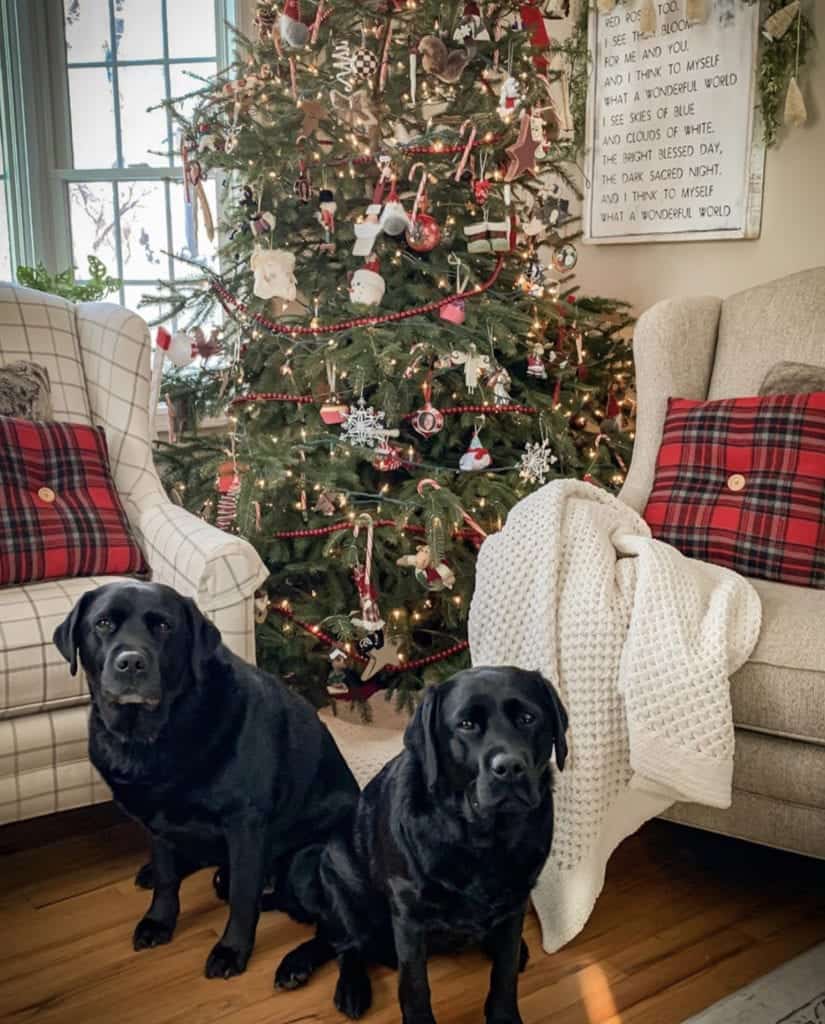 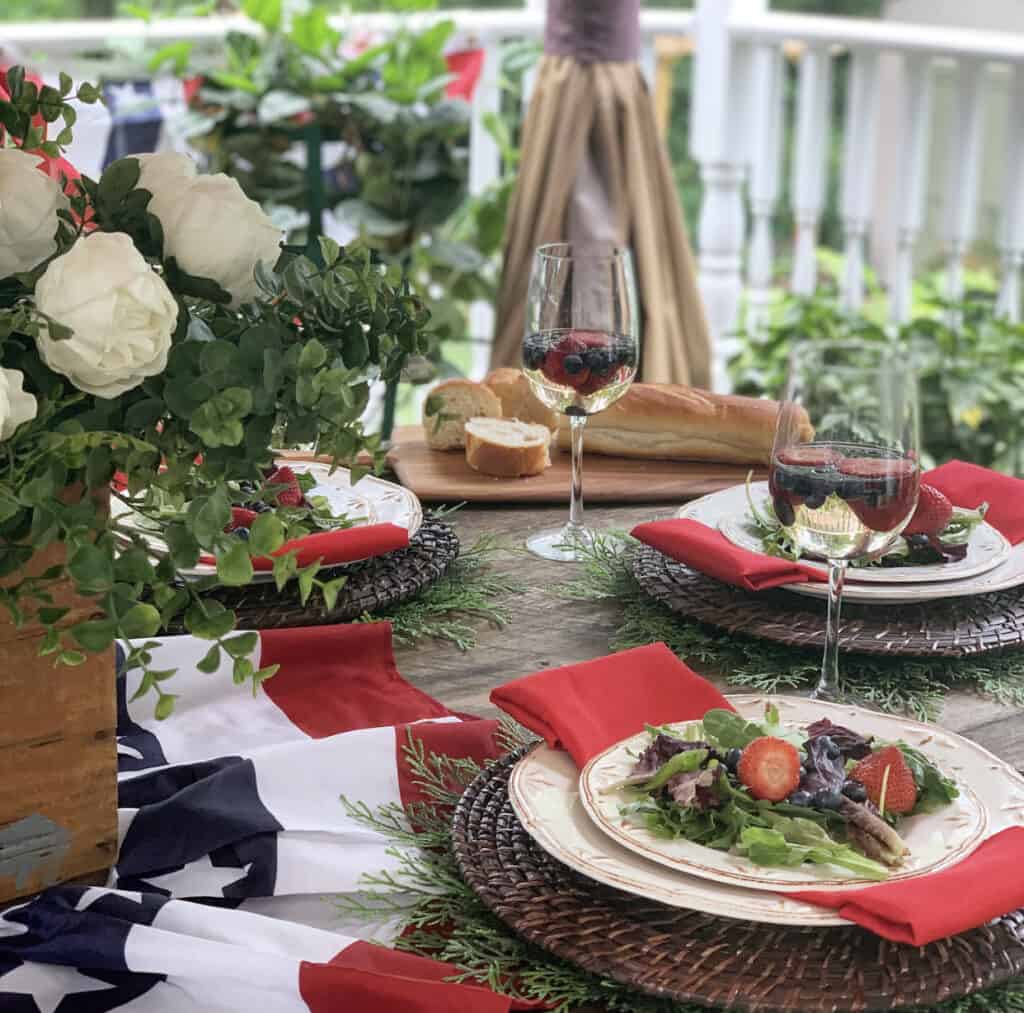 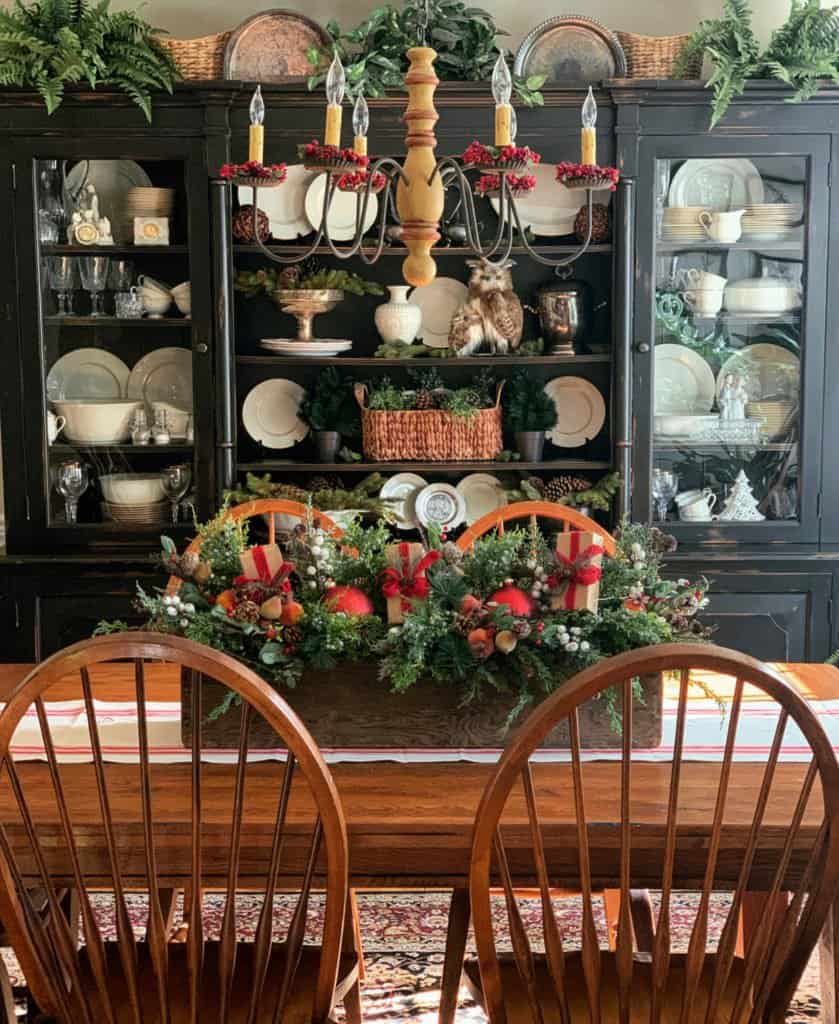 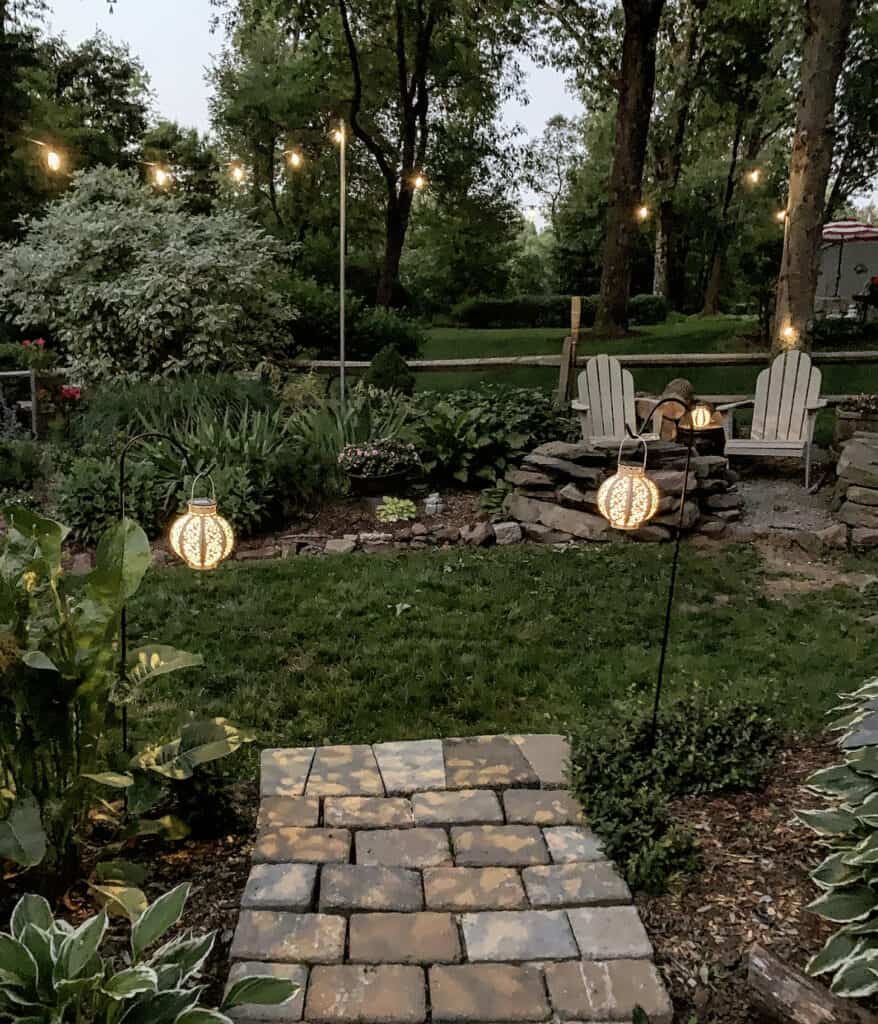 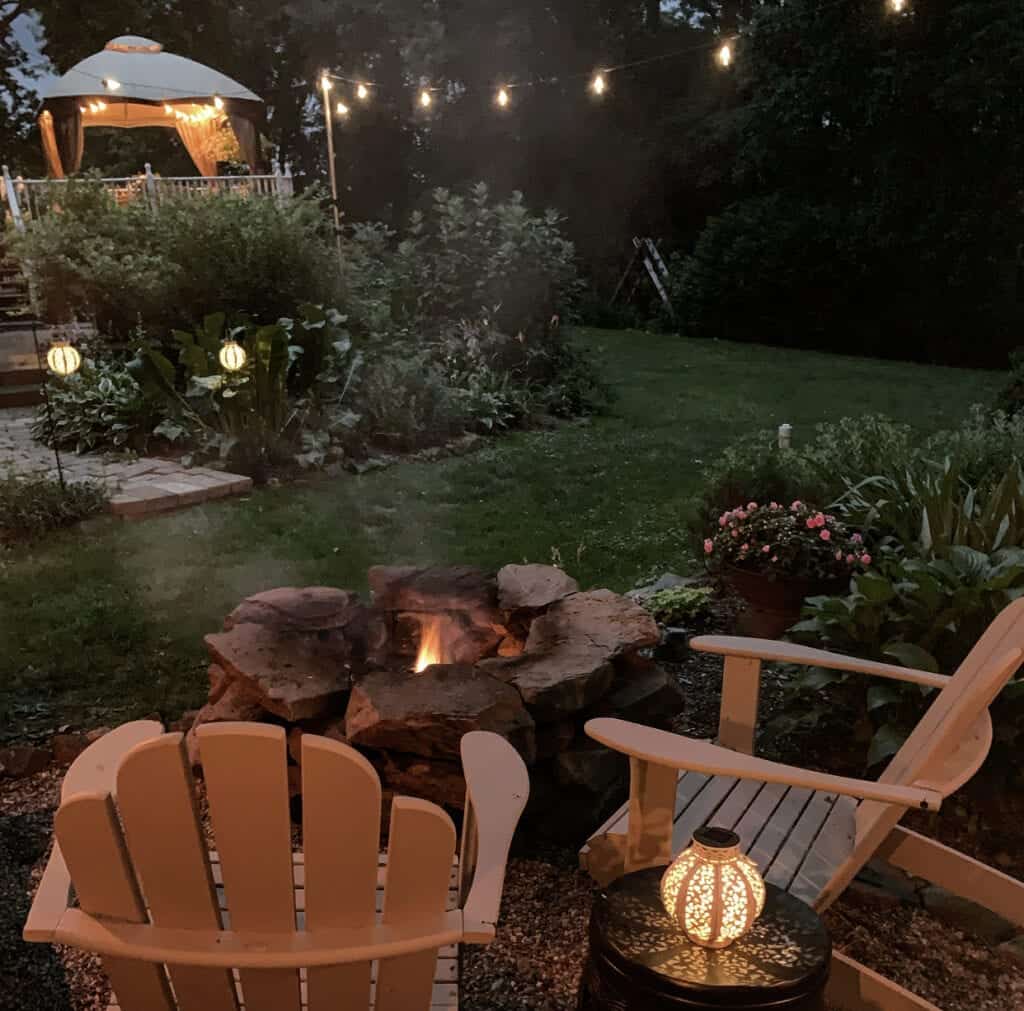 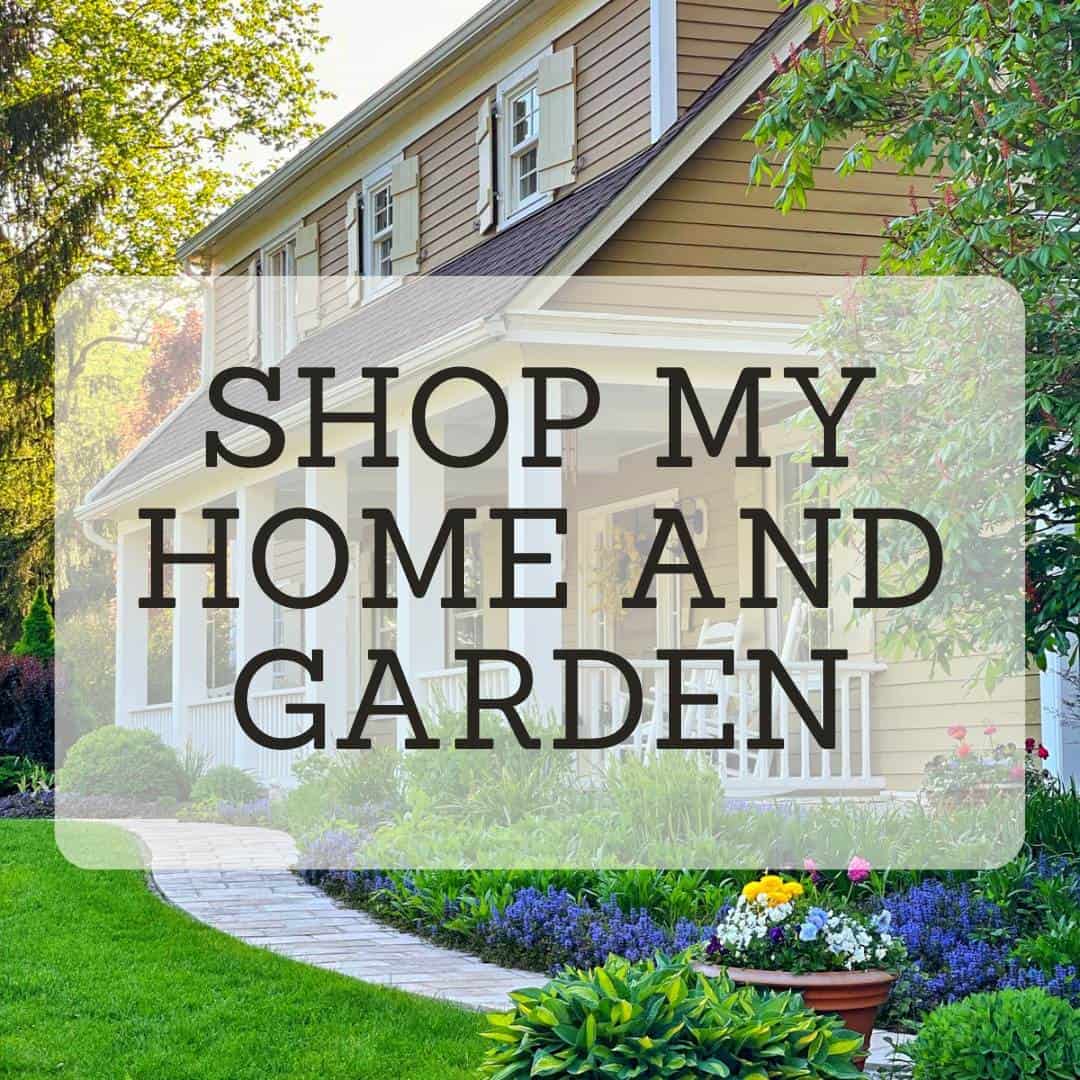 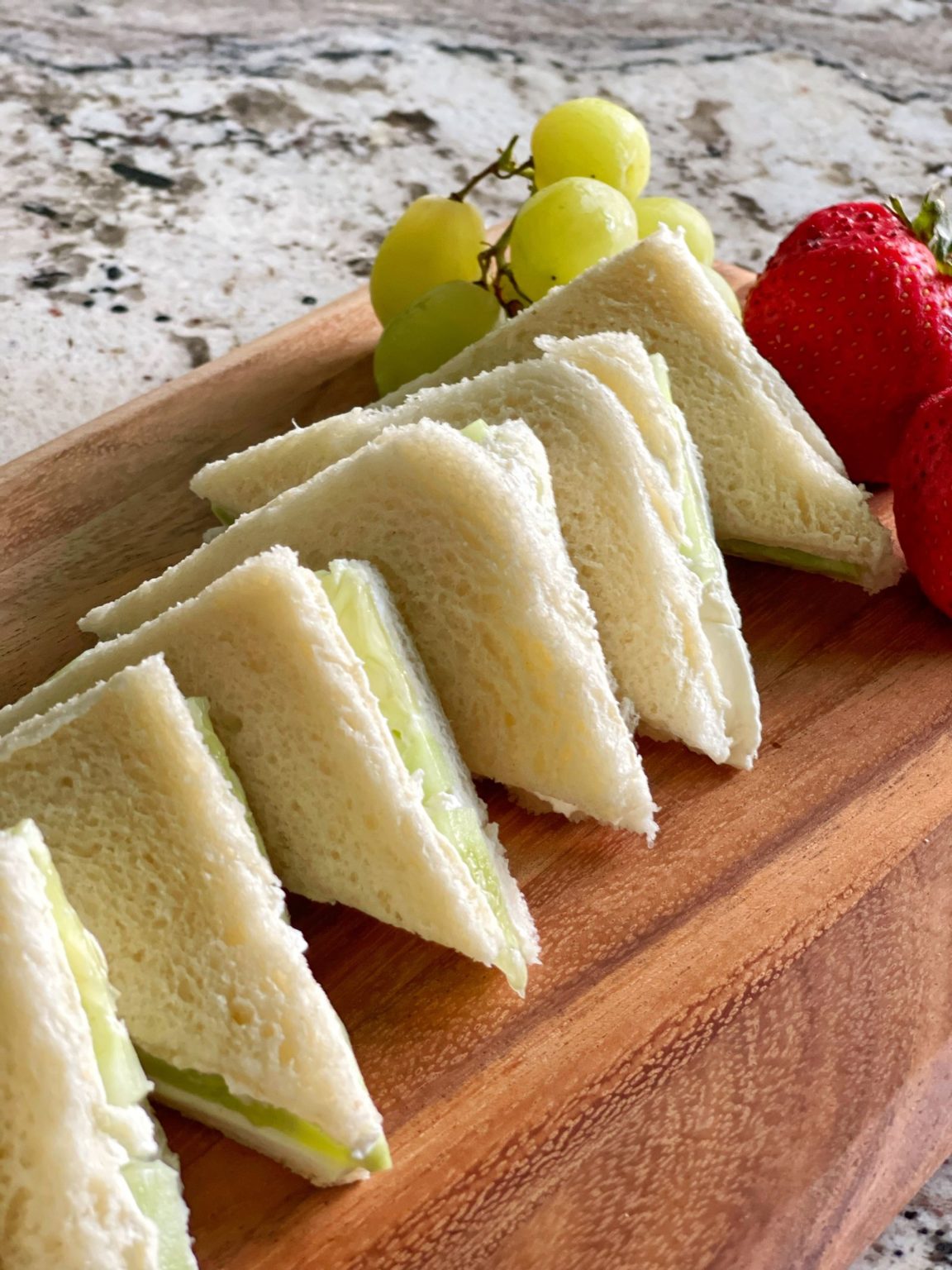 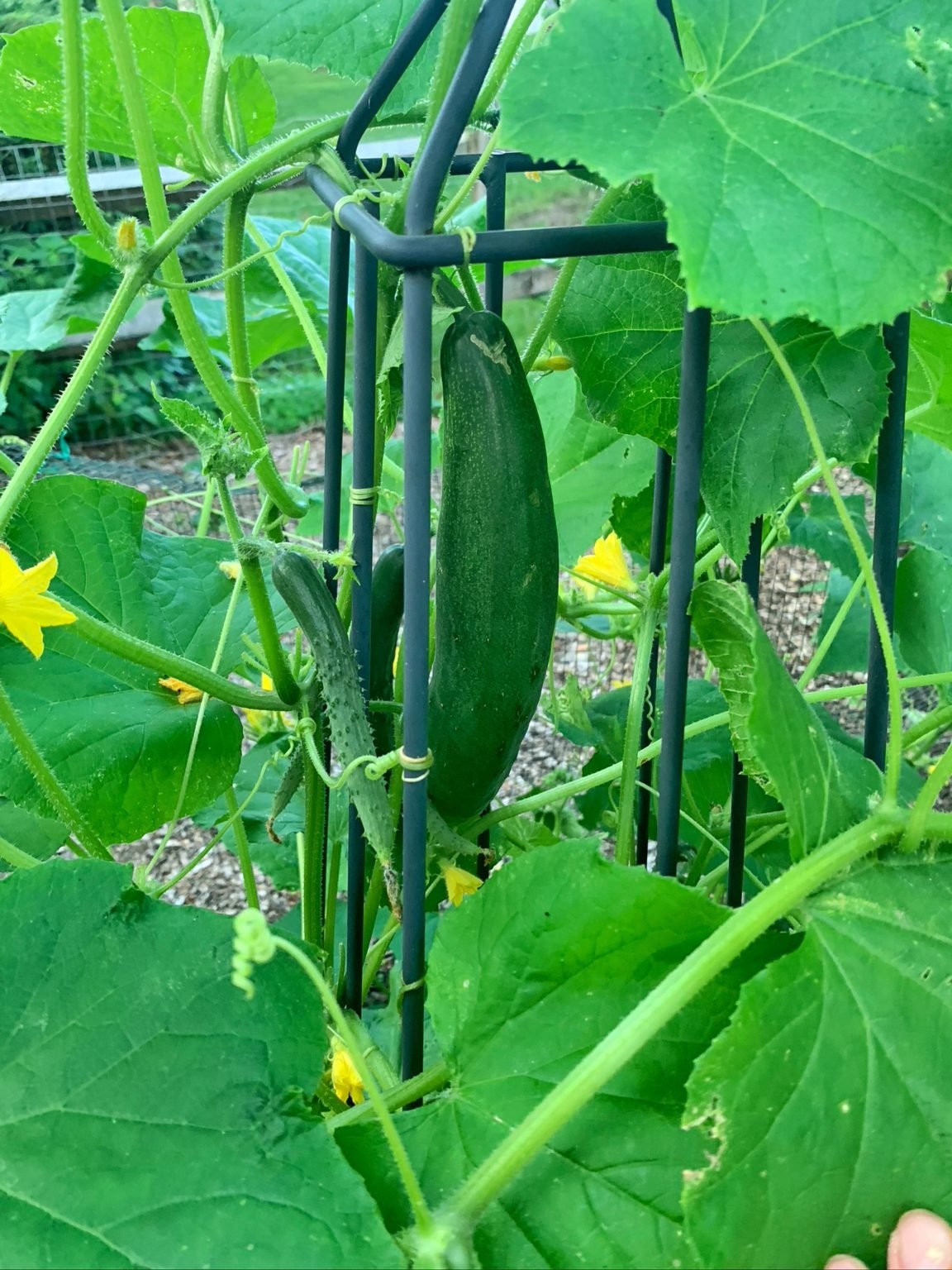 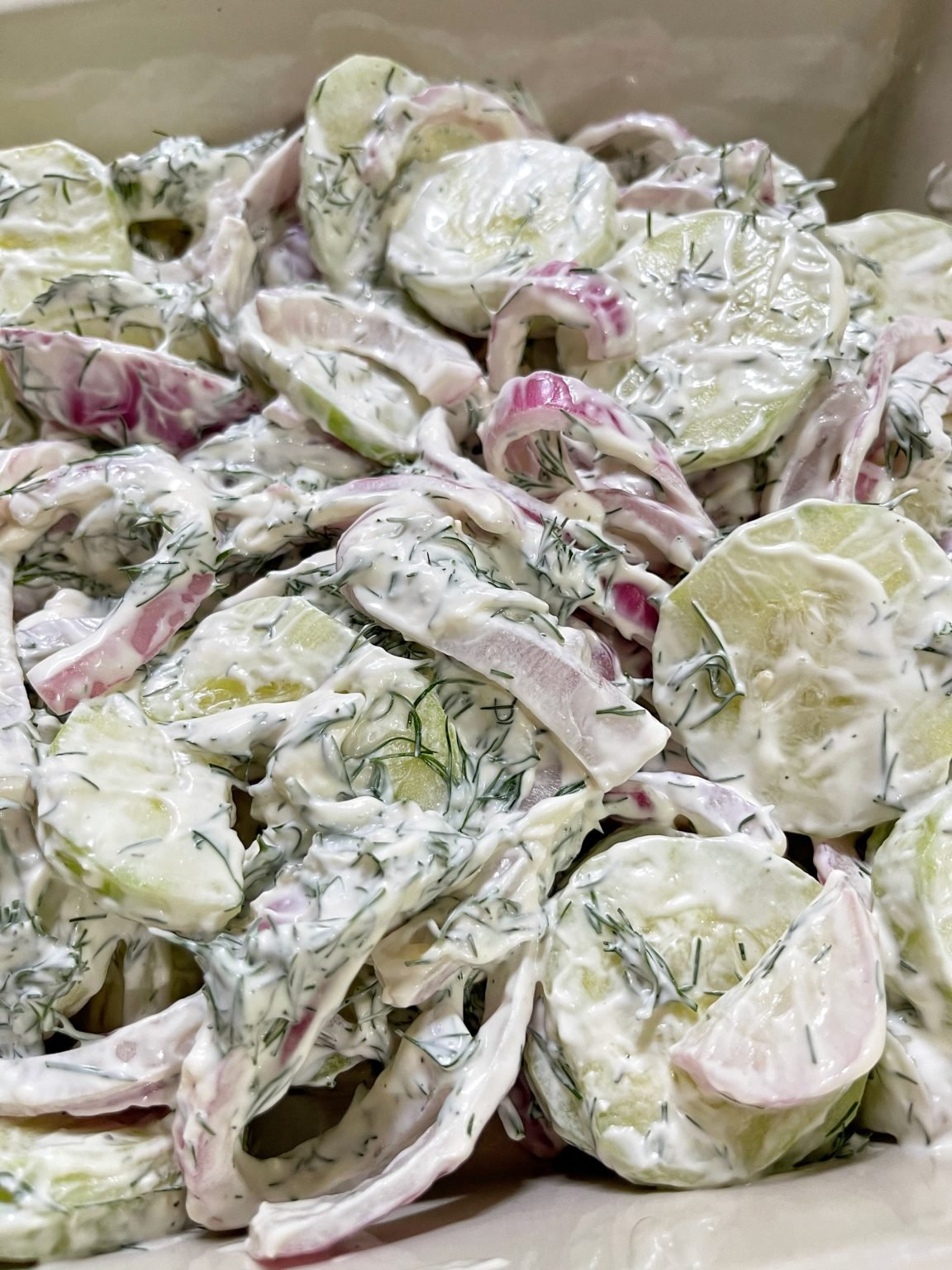 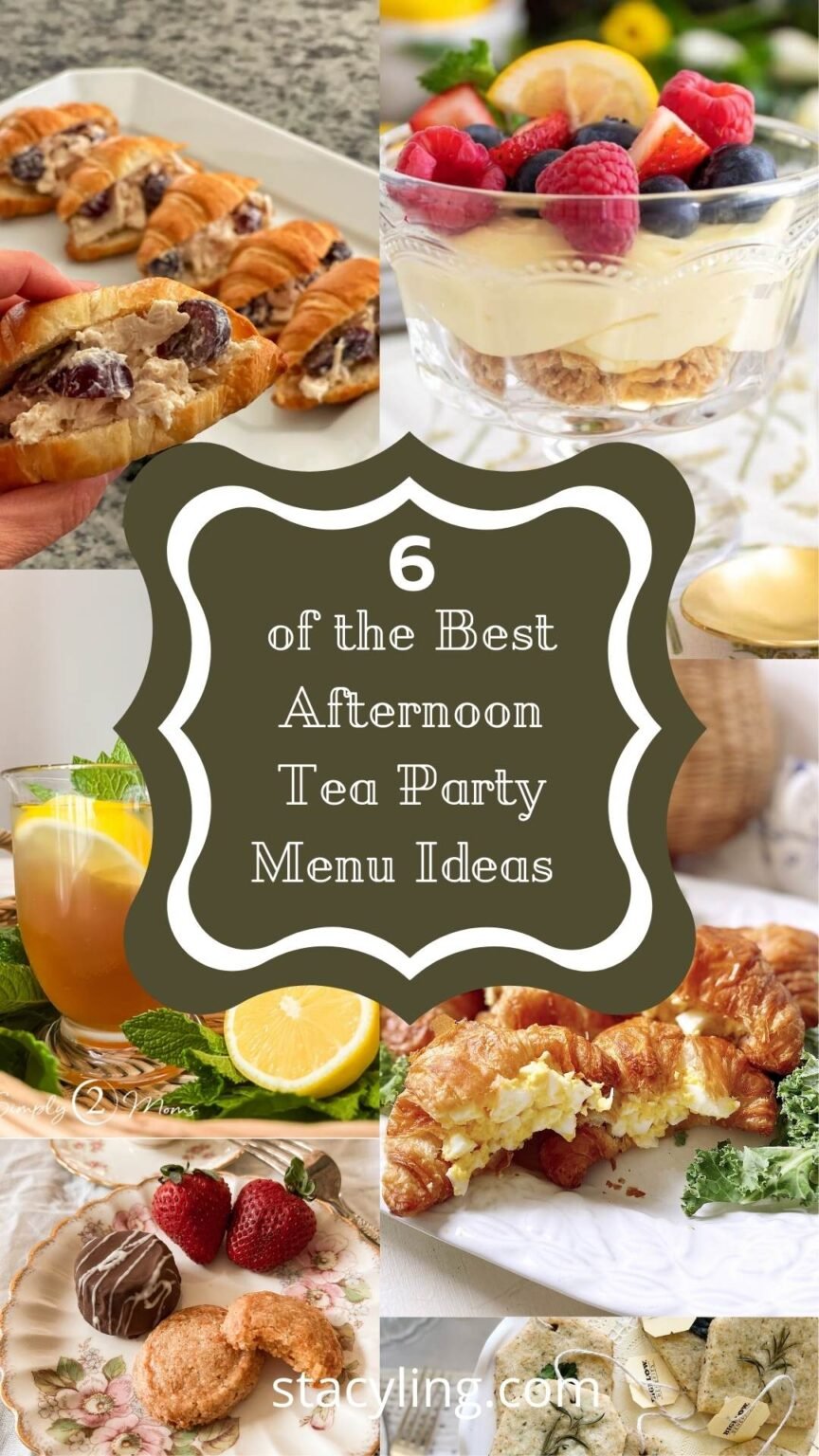 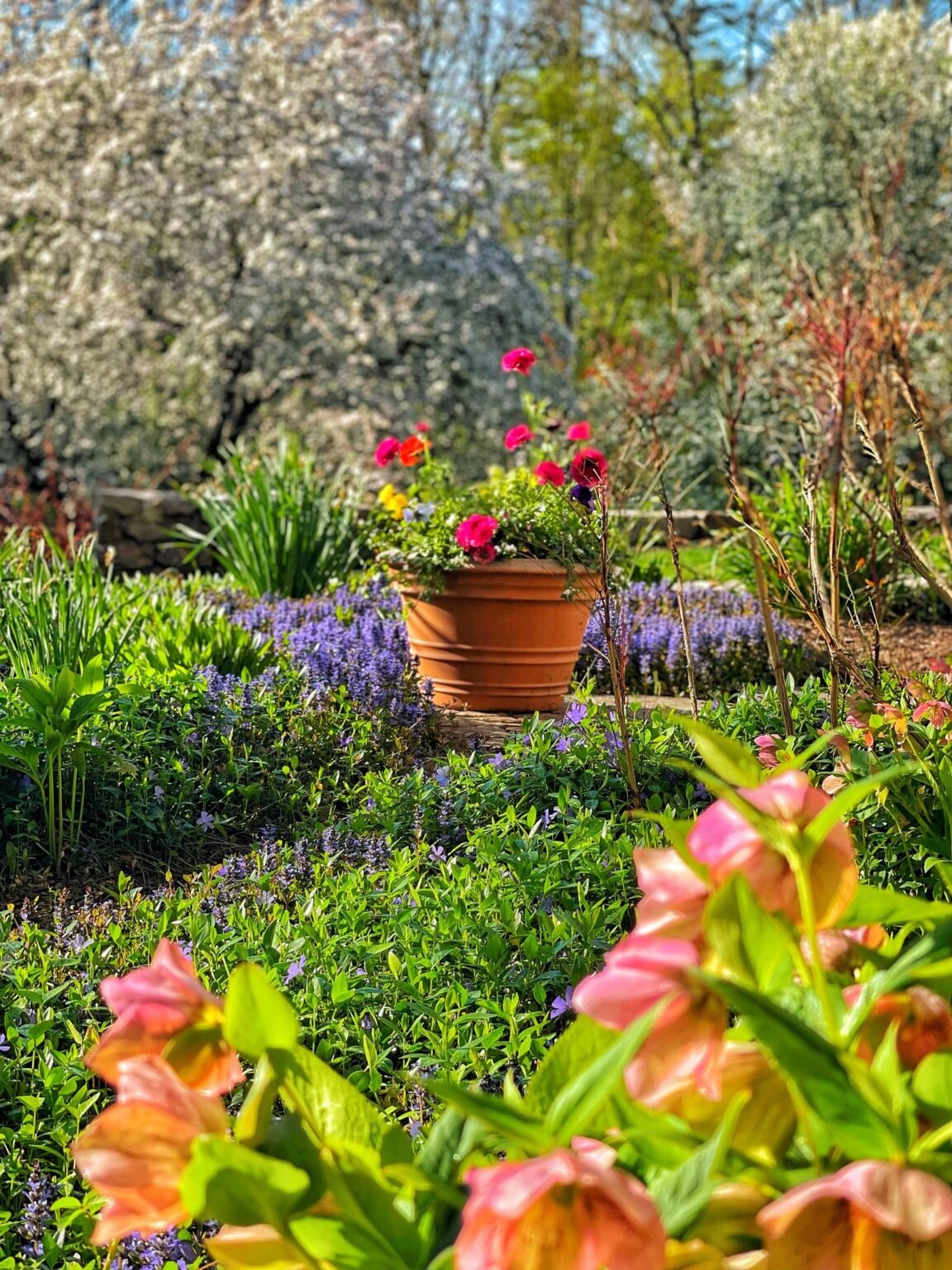 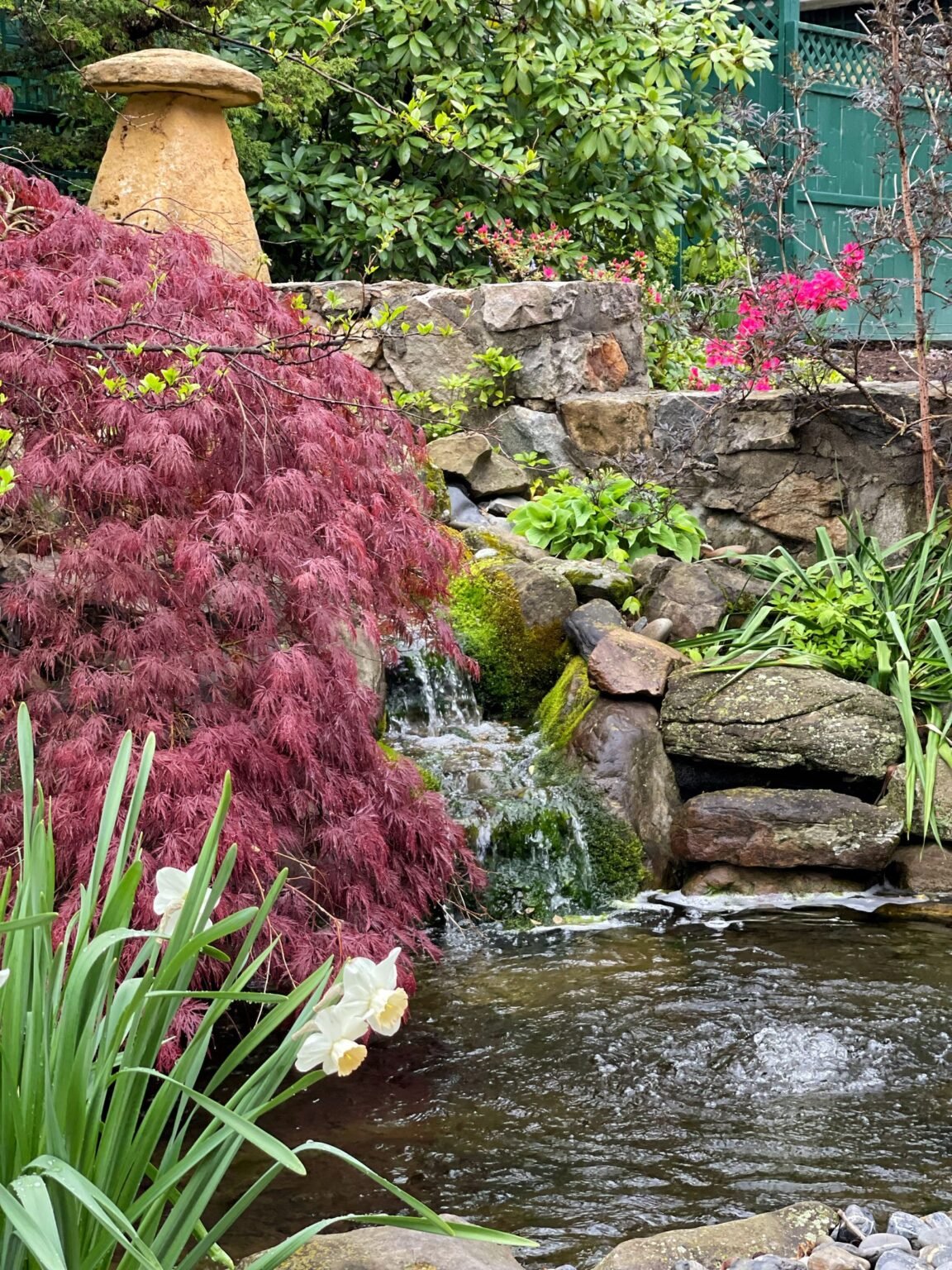